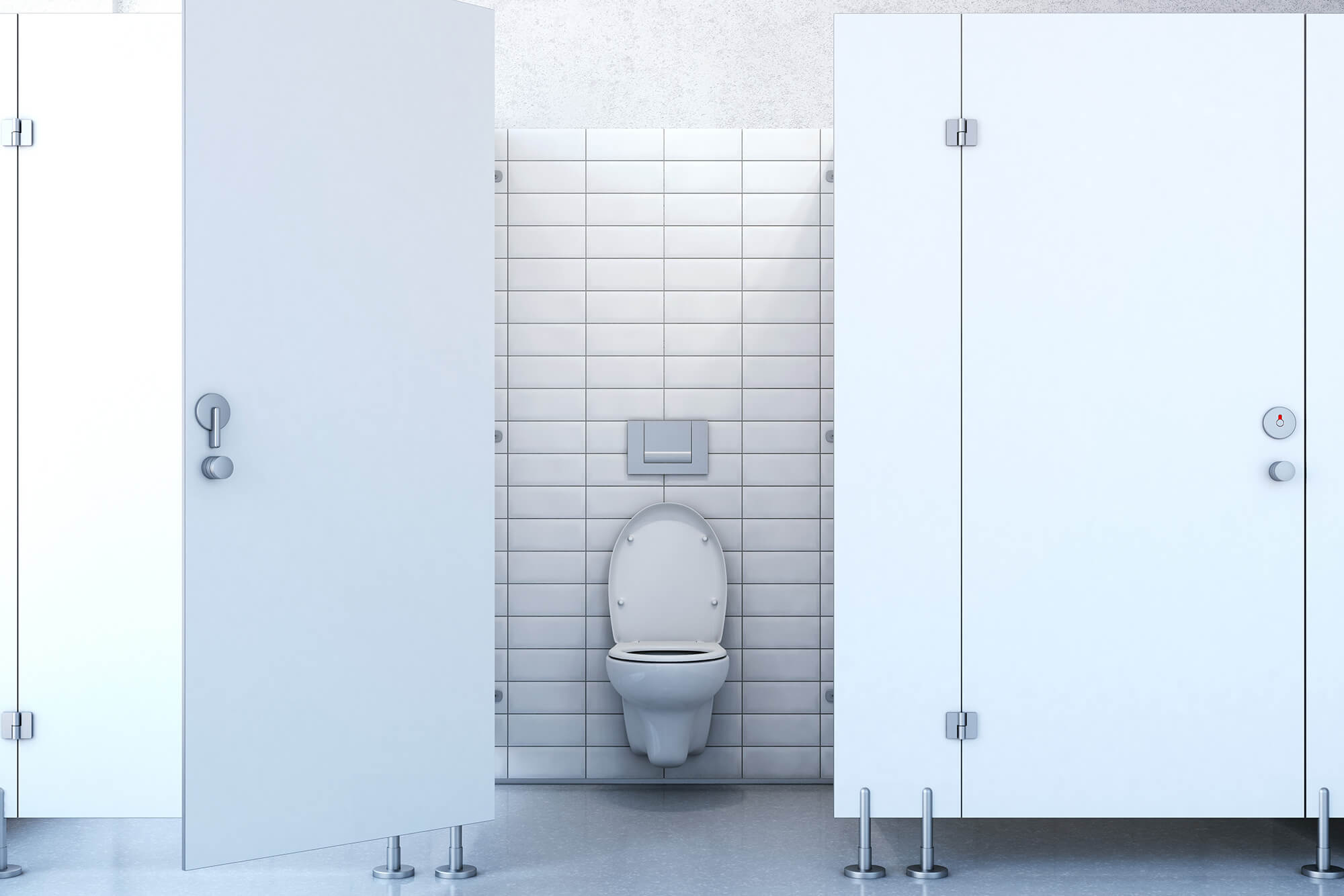 If the goal of technology is to make our lives easier, then why am I trapped outside of a bathroom by a fancy electronic door lock, unable to enter the password even when I know what it is?

The large black screen stares at me in silent judgement as I repeatedly press my finger into it trying to get it to display the numbers.

I step back and carefully consider the obstacle before me. I’m clearly supposed to be able to input numbers as I was given a numeric entry code but there’s nothing to press.

The black screen looks like a touchscreen, but nothing seems to happen when I touch it. I check the sides for a hidden button, but there’s nothing to be found.

I did the only thing a user can do when confronted with uncooperative technology; I hit the entire screen with my hand.

With a cheerful beep the screen lit up with numbers. That was unexpected. 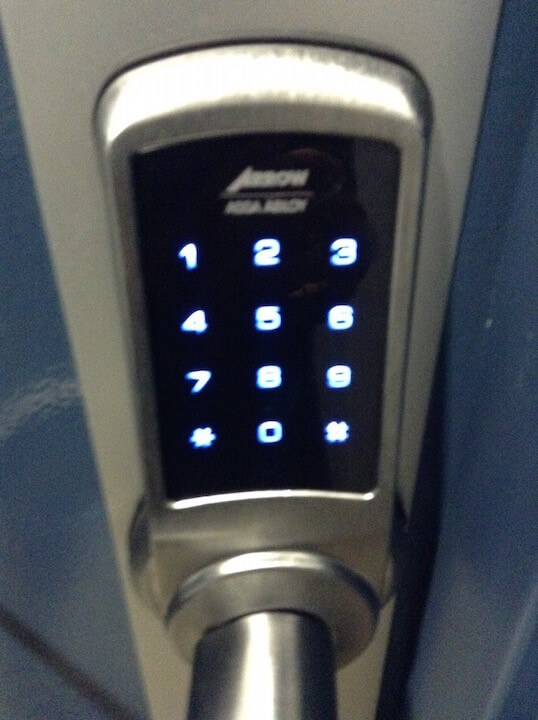 Being a researcher, I couldn’t just happily punch in my code and carry on with my life: I had to figure out what I’d done.

I let the screen fade to black again and then tried to quickly hit it with my fingers. Nothing happened. I then carefully covered the entire display with my hand and with a happy chirp the screen lit up. Evidently, to get the numbers to appear you needed to cover the display completely.

As I punched in the numbers for the door code I wasn’t sure if this was the worst designed door lock or the best, but one thing I was certain of was that they never should have installed this lock here.

There is a bit of a trade-off between usability and security. The more secure something is, generally, the less usable it becomes. The most secure safe in the world would be the least usable as no one would be able to access it, even the owner. This door lock, while difficult to operate, might be a good choice for people who are seeking that extra security that poor usability provides (Making Things Un-Usable (For Some)).

Now, let’s head back to the setting of this electronic lock. Was it guarding the front door of a secluded estate? Hardly. This door lock was securing a bathroom in the hallway of an office building. This lock would have to be used both by employees of the offices and any visitors to the offices. In other words, there would be a constant flow of new users to this door locking system, so the usability of the bathroom should probably have been prioritised over the security of the bathroom.

However, I don’t think this was a problem of misplaced security priorities by the building management company. I don’t think this feature was intended to make the lock more secure at all. Looking at the website, there is no indication either on the webpage or in the owner’s manual that this was intended as a security feature. In fact, there’s no mention of it other than in the door opening instructions. Therefore, I humbly submit to the jury that this was just bad design.

Did I have the unfortunate coincidence of finding the only bathroom that someone decided to “improve” with technology?

Some time later, I ended up with the opposite problem. Getting into the bathroom was easy. Locking it was another story.

I was at a party in my apartment building and had wandered a bit through the common areas before I managed to find the bathroom. It was a single room for both genders and, as it was unoccupied, I went right in. That was where my problems started.

You see, a good old-fashioned bolt lock was not modern enough for these bathroom designers. They needed to take the bathroom experience to the next level and so provided users with a convenient button lock. 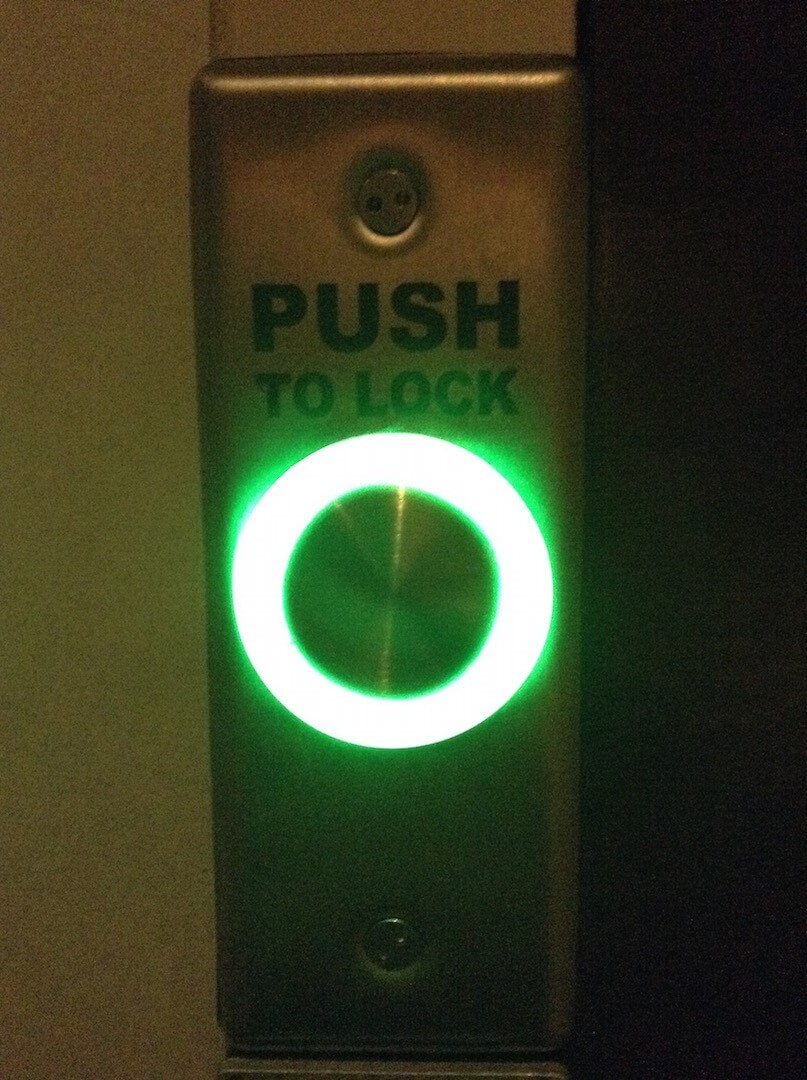 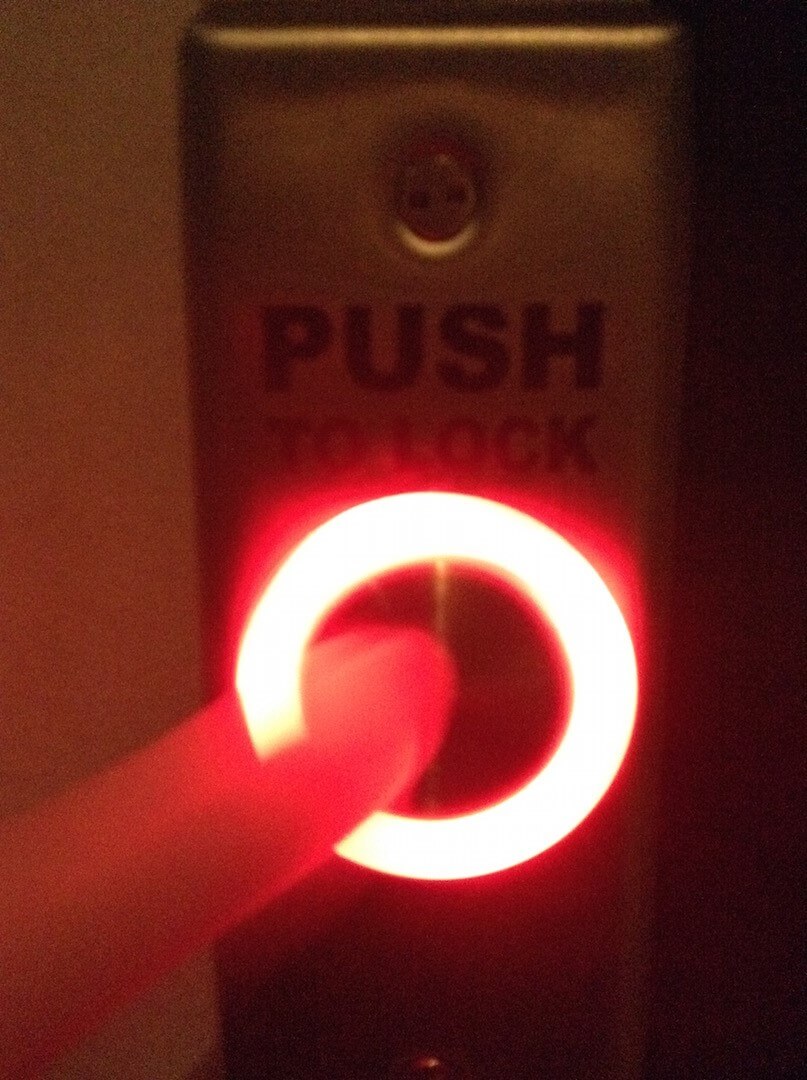 Presuming that red probably meant “locked”, I started to turn away from the door. As I turned however, the light suddenly became green.

I paused. Did I not press it correctly? I pressed the button again: it did the same thing. I double tapped the button, I tried holding the button for a bit, I jabbed my finger down on it in frustration and hammered away at it. Nothing. No matter what I did, the light didn’t stay red.

Now I stood in the bathroom in indecision. Was it green because the lock was broken or was the door actually locked? Having no way to check, I was torn about what to do.

A few weeks later, I headed back to this bathroom, this time with an assistant, to check to see if the door was broken or not. I pressed the button; it turned red and then green as before. Then my assistant tried the door and lo and behold, it was locked.

I’m not sure what green was supposed to represent to users. Perhaps it was showing that users were able to open the door from the inside? Or that it was done locking? Either way, this message was not clear and the actual status of being locked or unlocked is not shown.

Now, the allure of high tech often seems to come from the conception that it is better in some way. These two electronic door-locking systems cost more than traditional locks, yet neither one of them worked as well.

The first lock suffers from a problem of affordances. It looks like a touch screen and seems like you should touch it to make it work, but this isn’t the case. Users are left unable to operate the device, as the design does not suggest how to use it.

The second lock suffers from a problem of poor feedback. Red is a colour that is typically associated with errors, with unsuccessful actions, and with warnings. It is not a good colour to choose to indicate that an action has been successful. Also, the fact that the lock changes back to the original green colour leaves users confused as to whether the lock is currently in the open state or the closed state. Furthermore, there are a number of usability problems for users who have vision impairments. Distinguishing red and green is difficult for many people, so if the only feedback is this colour change, then this is not enough. In addition, this button is located to the left of the door, not in a location where locks are expected to be, making it difficult to find.

Design Recommendation: The easiest and best fix for this system would be to replace it with a conventional physical lock and I would strongly advise that this is done. If the electronic functionality is still desired, then make the lock appear and feel like a physical lock to users, but have the action of locking activate an electronic signal rather than a deadbolt.

There are many well functioning designs in the world that follow patterns people have come to expect. If you’re going to break the expectations that users have, then you need a much better reason than it ‘looking cool’, especially if it is in a bathroom.

Also, in bathrooms you should have as less physical contact with common stuff as possible, and the first lock requires the entire hand on the touch screen, kinda nasty :S

I know! At least it’s only on the way into the bathroom. I can usually use my sleeve to escape.

I experienced a similar problem with an electronic lock without a digital interface (except that I used my finger :-)). The door locked on entry but I could not find the unlock button because I was looking at the door not at one of the walls, the button was behind me!