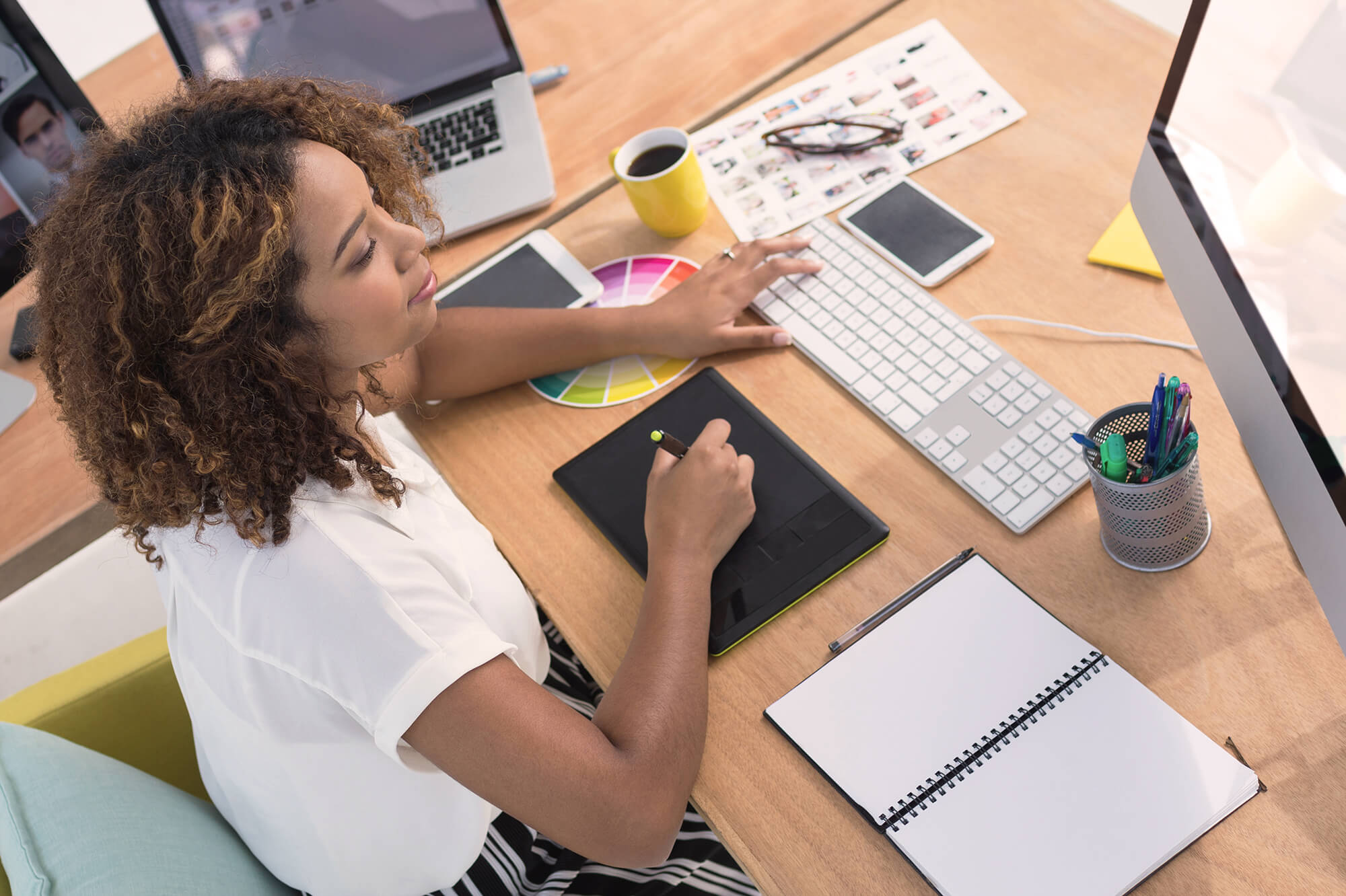 The Ethics of Design: 5 Ways to Ensure You “Do No Harm”

My colleague recently wrote a blog about a new restaurant in Vancouver that is positioning itself after Pablo Escobar, the notorious Colombian drug lord that was responsible for over 5,000 murders – including plane and car bombings – in his pursuit to supply 80% of the US’s cocaine needs in the ‘80s.

This got me to thinking about the role the designers involved in this (or any) controversy play. Do they realize what they’ve gotten themselves involved in? Do they ethically support this cause? Or are they just following a brief and acting as design robots to produce what they are asked? Should they feel any responsibility? Or should they simply be happy to work on a cool restaurant branding project?

Personally, I believe that designers have a responsibility to do no harm. Do no harm is a concept that is sometimes touched upon when talking about design. First, do no harm (Primum non nocere) is a Latin phrase that describes the fundamental principle used to remind those in the medical industry to consider the possible harm that an intervention might do (the Hippocratic oath) before deciding to do it. Its origins go back to 500BCE but it’s still relevant today and has been appropriated to many other industries, including design.

In design, do no harm is often discussed in terms of “social good” – the concept of using design to help solve society’s problems. But, unfortunately, in design conversations, it often stops at the superficial. In the context of UX, it’s often discussed as ensuring that interactions do not interfere with the user’s work, result in frustration for them, or prevent them from completing their work. While these things are important (and one of the primary focuses of Akendi’s work) they are lower on the priority list compared to the realization that design can actually cause harm to individuals and society.

Long-established industries (think medical, auto, construction, law) have had an extended period of time to create standards and have them evolve. The western world has building codes that stipulate every detail of how buildings should be constructed, and engineers that ensure they won’t fall down. Car manufacturers have evolved and are always creating new technologies to try to prevent people from getting hurt, including the invention of airbags and the inclusion of back up sensors, cameras and alerts. That said, they are also creating driverless cars that have potential to run down pedestrians!

But what’s happening online? And what are our responsibilities as designers to “do no harm”?

There is recent controversy around Facebook and the degree to which it could be influencing political elections and negatively affecting democracy. Facebook has also been accused of being complacent as rogue groups on the fringe of society are given the opportunity to build a platform and negatively influence others. But Facebook (and other social media platforms) were originally created for good. It can be argued that connecting with friends and family to share your lives and stay connected – even if these people are on the other side of the world – is a boon for society. But what responsibility do for-profit businesses (Facebook made $40.7 billion USD in 2017) have to set up guidelines and controls so they “do no harm”? Should Facebook’s designers (and even more so, their leadership) try to anticipate and counter the platform’s negative uses? I think staying on top of things and trying to counter the negatives is a challenge that all designers should aspire to.

5 Ways to Ensure You Do No Harm

1. Make a Conscious Choice to do No Harm

It’s a personal decision to do no harm and you need to set guidelines for yourself. What are you comfortable supporting? Who do you want your name connected with? What kinds of activities do you think are ethical? Not ethical? Ask yourself the hard questions and make your own manifesto. Articulate your purpose by writing, drawing or expressing your beliefs in another way. Why did you become a designer? What did you envision when you were in design school? Were you hoping to get more people smoking? Did you think that undermining the democratic process would be something you’d throw yourself into? We’re you hoping that misogynists could get a platform to spout their sexist beliefs to a wider audience thanks to you?

At Akendi, we have had many conversations about the type of organizations we would or would not engage as clients. We also abide by the consulting standards of professional practices from organizations such as RGD and AIGA.

2. Understand What’s Behind Your Client’s Strategy

Ask why they want to take the approach they are proposing. Quiz them. As a designer you may not think it’s your place to do so, but you need to understand what they are trying to do so you can decide how to do it in a way that matches your own ethics. If they are trying to create an edgy new restaurant that will get a lot of attention, it’s possible to do so without resorting to shock value or being insensitive to the life situations of others. It is your job to articulate why that approach might be a bad one. Clients hire you because you are an expert. They trust your guidance and know that you have experience that they don’t. It’s your job to have these hard conversations and guide your clients down the right path.

3. Understand Who You’re Creating For

Empathy for your audience is important (read our president’s blog post about it) but it’s not the only answer. Talk to people on both sides of the coin. Understand their points of view. If you’re creating a new gaming site, don’t just listen to the word of the client about how great it will be. Talk to those who may be using it and understand their motivations. What are some pitfalls this user may encounter? How can we integrate tools or alerts that help them to avoid getting sucked in too deep? How do we give them freedom to do what they want while protecting them?

4. Remember That You Are Responsible For What You Create

You can’t blame your boss or your client when you create something that is hurtful to another human being. You can’t turn the other cheek and pretend you don’t know. You are responsible for your actions and have to think through the impact you will be creating. You’ve done society a disservice if you’ve created something that may go against basic human rights. Do your due diligence and keep your head above the sand. Go into what you’re doing with eyes open. Do no harm!

Testing your design will give you assurance that you’ve done the right thing. This is your last chance to get it right before putting it out to the world. If you’re goal is to do no harm, then make sure you’re not. What do people think of what you’ve created? What are some concerns they may have? Could you have inadvertently created something harmful? Don’t be afraid of feedback. In the long run it will make you a better designer and get you better results.

I firmly believe that as a designer you have a responsibility to do no harm. That means:

Don’t be Afraid to Say No

Famous designer Milton Glaser wrote an essay called Ambiguity & Truth where he outlined a series of questions (called The Road to Hell) that brings to light some of the ethical dilemmas designers face. Ask yourself which of these you’d be ok with and which you feel do no harm. 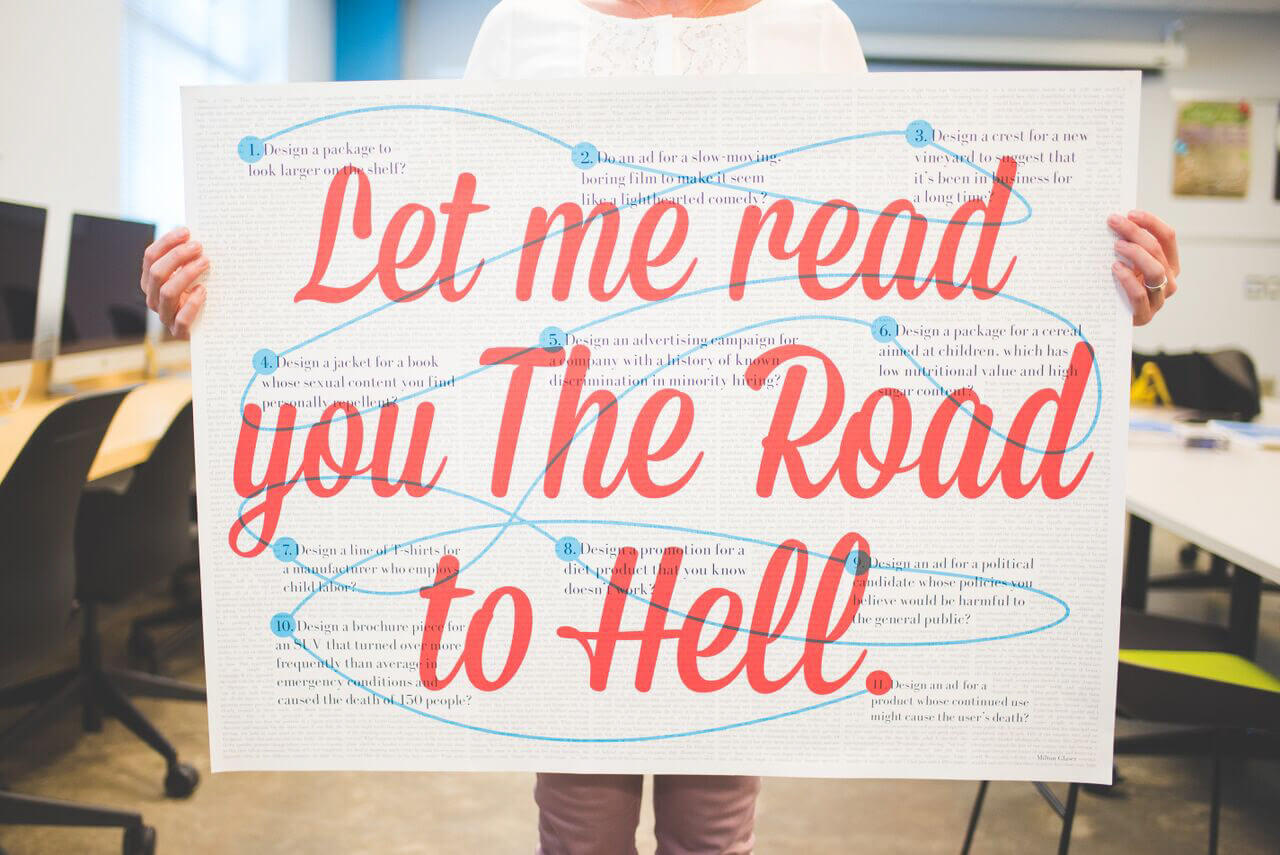 So What Should You Do?

Come to work every day ready to live your values and do the best work that you can. You can use your design super-powers for good, or at least not for bad.

I believe it is your job (and your challenge) to do no harm with everything you create. Be proud of what you put into this world. Stand tall and declare what you’ve made. Don’t put yourself into a position where you have to hide or shirk that you’ve been involved with something.

If you’re ashamed of what you’re doing then it’s not right. If a great opportunity comes along that doesn’t allow you to do this, then do what every 2-year-old does best: say NO!