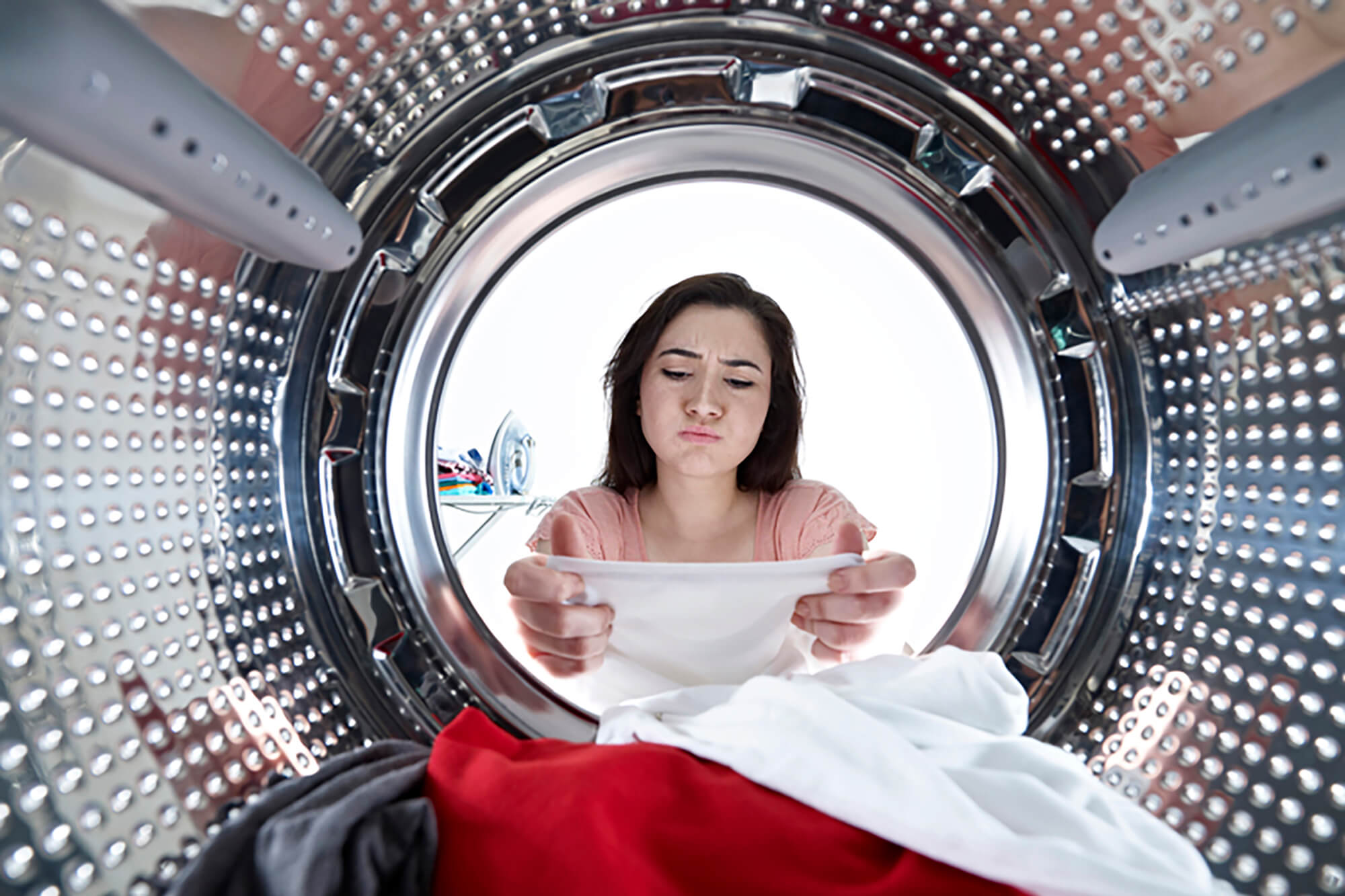 This Complex Washing Machine Reveals How NOT to Design Icons

I was waiting for the elevator one morning when joined by a man I hadn’t seen before. The first thing he said was not ‘good morning’ or ‘hi’, it was “do you have a washing machine in your apartment?”

Unsure where he was going with this question, I told him that I did.

An expression of relief washed over his face. “Do you know how to use it?” he asked eagerly.

At this point, I would have thought this guy was a complete weirdo if not for the fact that I understood what he was going through. We must have had the same washing machine.

As we got on the elevator, the man explained that he had just moved in and there was no instruction manual in his apartment. He had tried to figure out how to use the washing machine without it, but was confused and was planning on going to a public laundromat to wash his clothes instead.

I couldn’t blame him. To use this washing machine without an instruction manual would require a PhD in abstract symbols, an understanding of the European washer and dryer market, and a lot of luck.

This washing machine was so poorly designed that my new neighbour would rather go through the hassle of using a public one then figuring it out on his own.

Let’s Just Try all the Buttons

Here’s a picture of the main control area of the washing machine:

As you can see, the display is packed with buttons and knobs.

What do you do first? There isn’t a visual order that guides you to select settings in a particular way. You jump from one side of the display to the other to get it to work. Below I’ve labeled the diagram in the order that the instruction manual says you should select them.

It’s all over the place!

As for the buttons, some of these make sense and you can figure them out, and some of them are going to stump the average Canadian user.

I first tried to figure out how to use this machine on my own without consulting the manual, but like my neighbour, I gave up.

Some settings were easy for me to figure out, like the knob for water temperature. But dry time didn’t make much sense. Why would a washer have a knob that said ‘dry time’?

In Canada, two in one washer/dryer combos are rare (and by this I mean one machine doing both, not a stacked unit). The one in my apartment is actually the first one I had seen in my life. I had no idea they even existed until I moved in.

I only figured out it was a combination unit because someone left the instruction manual behind and I read it cover to cover.

This problem only exists for people who didn’t buy the washer. Presumably if you went through the purchasing process you would already know that it dries as well.

However, even with this knowledge, this machine is still inoperable because of the main dial.

Now, let’s look a little closer at the main dial of this machine 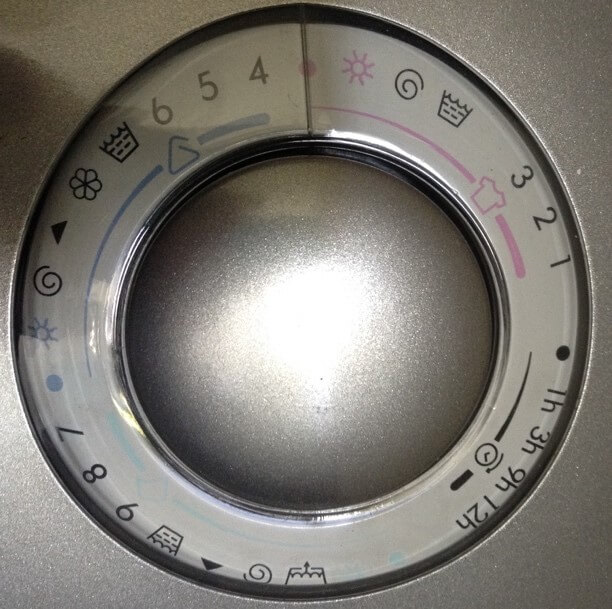 So, setting aside the questionable nature of many of these icons for a moment, there are four main areas of this dial, the pink shirt, the dark blue open triangle, the light blue rag, and the black clock.

The colour is really hard to see on this dial. What you see in this photo is an exact replication of how hard it is to read in real life.

So already anyone without very keen eyesight is going to have a hard time using this.

Even if you can see the symbols, they doesn’t help you that much. Let’s look a little closer at the symbols that appear on this dial. Take a moment to look at them and guess what they might do.

There’s a clock, a flower, an arrow, a dot, a spiral, a sun, a shirt, a rag, a triangle thing, a not so full bucket, and a very full bucket.

My personal favourite is the one that looks like a triangle instrument. I still have no idea what they were hoping to accomplish with that symbol. What exactly is it meant to look like? I’m pretty sure it’s not indicating a special musical instrument setting.

None of the symbols they use on this dial are standardized. The open triangle is supposed to indicate permanent press according to the manual. Unfortunately, this symbol isn’t the standardized bucket with a line under it. So even laundry experts won’t understand it.

Essentially they made up their own icons and put absolutely no explanation next to them.

I’m not the only one to be frustrated by this complete lack of concern for the end user. An article written to help people use their washing machines had the same feeling.

I was willing to guess that I might want to select something in the shirt category (mostly because that was the only icon that looked like an article of clothing), but I wasn’t ready to randomly guess a number.

This machine is definitely not walk up and use. I have used over 10 different pairs of washers and dryers in my life and never needed to consult a manual until now. And this is including a washer I used in Korea (where I couldn’t read any of the labels). Despite that, I was still able to use it because the icons and the placement of the buttons made sense.

Is That an Error? (What’s Happening to my Clothes?)

I read the manual, put the clothes in, started the machine, and walked away. It sounded like a 747 was taking off in my laundry closet, but after making sure that the machine wasn’t erupting into flames, I figured that was normal.

I carried on with my everyday tasks.

In five hours the machine finally stopped making a ton of noise (no joke, that’s how long a load took) and I walked over to take the clothes out. There was a red light on the display blinking insanely fast. I had no idea what this meant and I was too tired to consult the manual again so I just tried to take the clothes. The door was locked.

I stared at the blinking light unsure if this was supposed to indicate some kind of error. The machine had gone through the whole cycle and nothing was happening. Nothing except this light.

I didn’t bother to get the manual. If it was broken, so be it.

Half an hour later, I checked back on the machine and the red light was now slowly blinking. I tried to open the door again, and this time it let me.

The clothes were still wet, but I wasn’t too concerned. I remembered the manual saying that they would feel wet when they came out but if I just shook them for a few seconds they would be fine.

After a minute of shaking I had to conclude that they were not fine. They were wet.

I threw the wet clothes on every surface I could find to let them air dry and called it a day.

I have used a lot of washers and dryers in my life and this is by far the most abysmal one. Not only is it difficult to operate, but when you finally get it to run, it doesn’t even work.

It uses a cryptic set of symbols, requires the use of a manual, and communicates status in a bizarre fashion. Nothing about the design is easy to use or well thought out.

After using this machine, I have a very good idea of what to avoid when looking for a washer.

Do you have an example of very good – or very bad – UX you’d like to share? We’d love to hear about your experiences in the comments below…

For my sins when I was living in the UK more than 35 years ago I was contracted by the Consumer’s Association to test the usability of washing machines and to develop a test protocol for others to follow in future. I had people load dry clothes, powder etc. Wash the clothes and dry them and finally remove them. Several machines proved problematic for a variety of reasons but I thought that the effort was worthwhile. I now believe that the value of user testing is still underappreciated. I even have a copy of the report if anybody is interested.

I would be very interested to have a copy of your report if possible. I am currently writing a report myself on Washing Machine interfaces and this would be very useful. Do you know if the test protocol was used after your report was published?