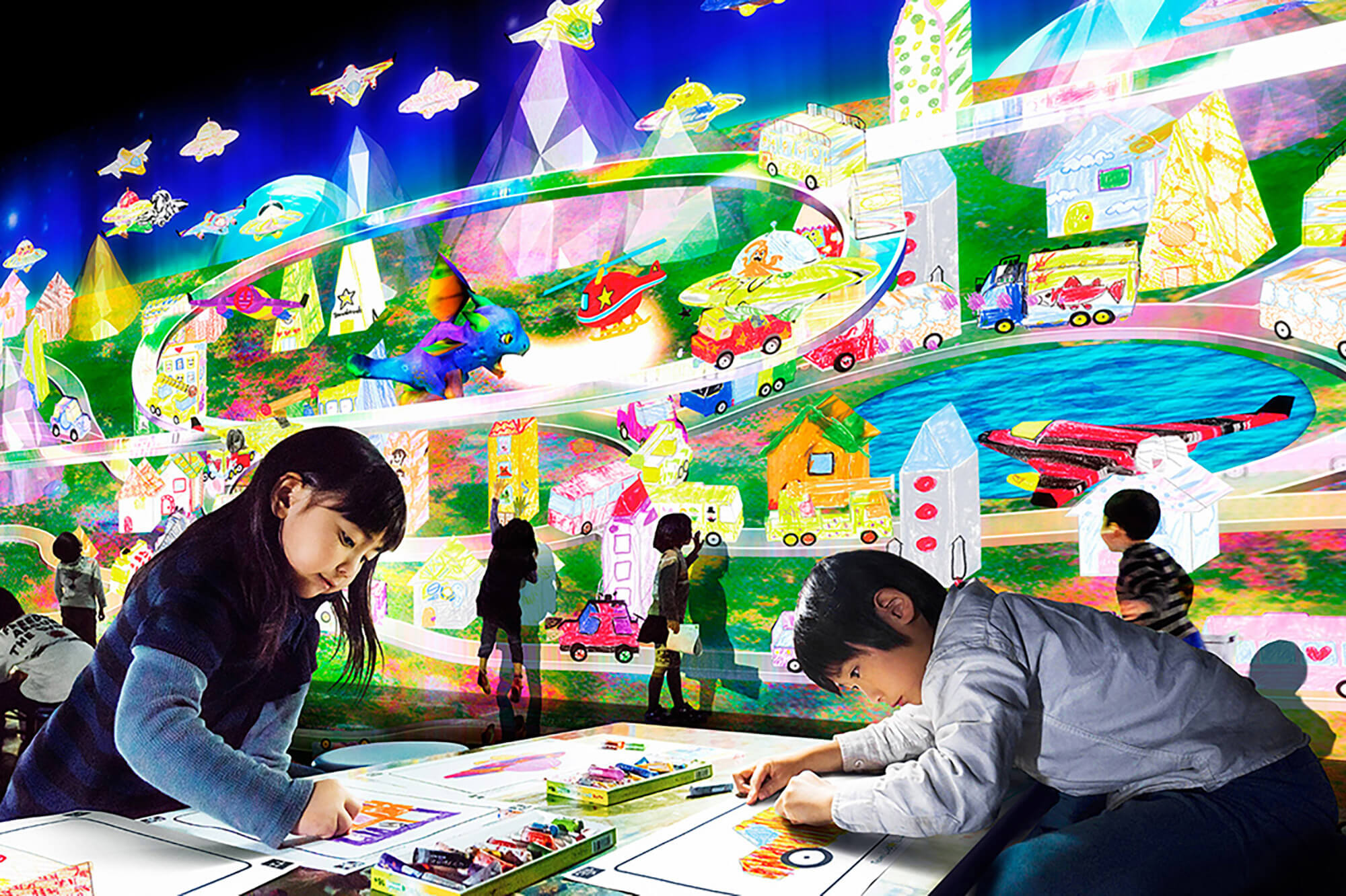 It is Not Child’s Play

Last Fall, while I was in San Francisco, my friends and I made a stop in Menlo Park. We went to see an exhibition designed by teamLab, a collaborative group of artists specializing in digital experimentation. We unanimously agreed that the kids’ section of the exhibit was by far the most impressive.

We had entered a dark room with a massive wall display of a digital underwater scene. On the opposite wall, a city scape was displayed. In the middle of the room were small tables and chairs commonly found in a Kindergarten classroom. As we walked closer, we could see that on the little tables laid some crayons and white sheets of paper with outlines of different shapes, nothing out of the ordinary. The shapes had two themes matching the muraled walls: city transportation and ocean life.

Like the kids around us, we sat there scribbling and colouring. I picked the profile of a school bus. Naturally I coloured it yellow, and wrote my nephew’s name across it.

I followed a kid to an unassuming table with a small white box and an overhead light. I watched as she laid her firetruck drawing on the white platform and pressed a big black button. A light scanned across her page and – can you guess what happened next? 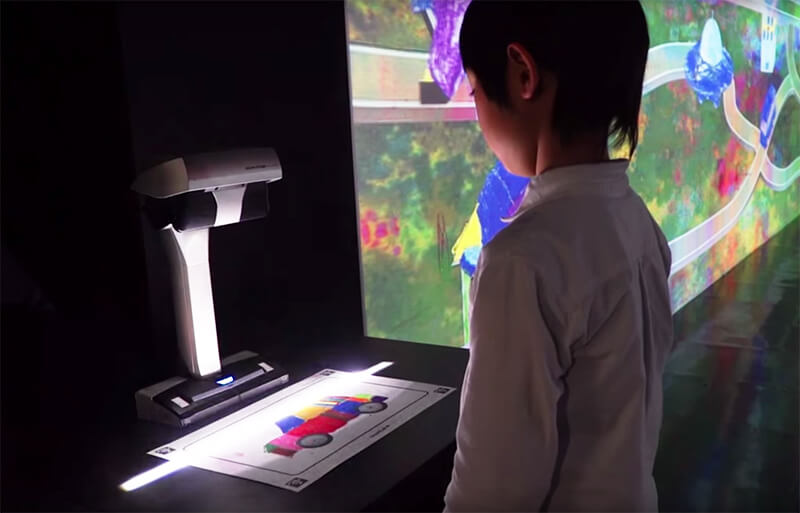 Her drawing of the firetruck appeared on the giant wall next to us. Her drawing joined the traffic jammed lineup of vehicles drawn by other children (and big kids at heart), moving around the digital landscape.

You can only imagine my excitement when it was my turn. I laid my drawing of the school bus on the white platform, pressed the button and my bus had come to life on screen. It was, by far, the coolest thing I had seen in a while.

Childlike, I followed my bus as it moved through the city. As the bus followed the highway ramp back around, I could see the bus turn into a three-dimensional image and return to its flat shape again (this time with my nephew’s name displayed backwards). My face lit up with glee, as I ran back to the tables to add more to the lively city. I also drew a shark and a turtle to add to the ocean life. It was best 90 minutes I had spent!

Once digitized, the designers at teamLab had the brilliant idea to tie it back to a tangible experience. Kids could go up to the underwater scene, touch the wall and wherever they placed their hands the digital drawings of the sea life would gather, as if a handful of fish food was dropped by the child. 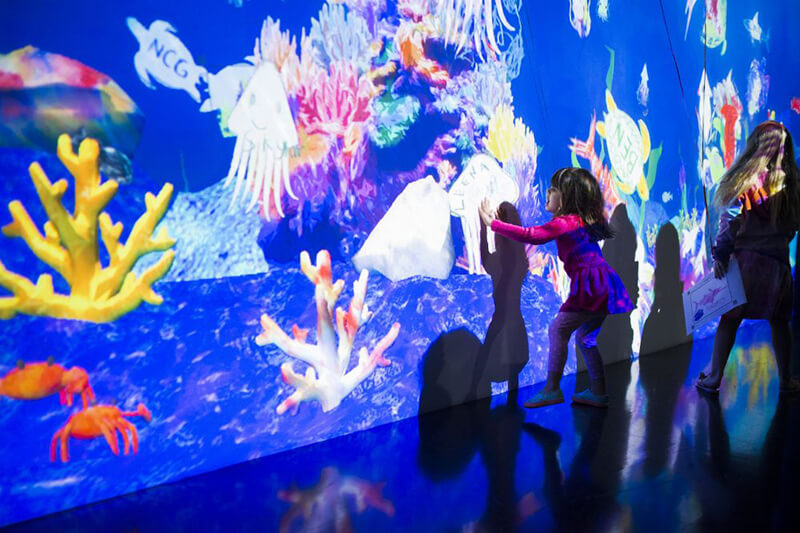 On the other side of the room, after you have scanned your vehicle, there is an option to print out its net. (If you recall in elementary school a net is a pattern you can cut and fold to make a model of a solid shape). At this point, kids can cut up the cardstock net and glue their drawing into a paper 3D model to take home. 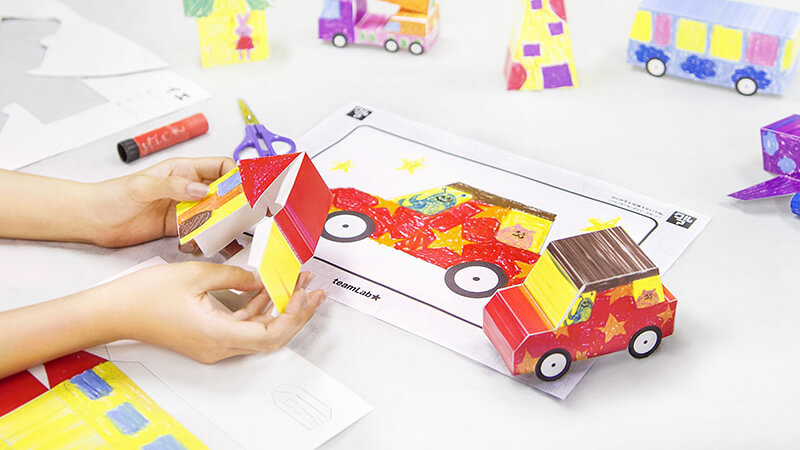 Creating delightful interactions is not child’s play, and teamLab aces it.

Image Credits: The photos included in this post are by teamLab